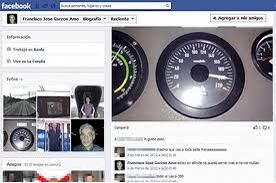 The driver accelerates his vehicle to nearly twice the speed limit in most areas (124 MPH) and takes a photo of the speedometer, posting it to his Facebook page with a comment….”I’m at the limit and i can’t go any faster or they’ll fine me!”  Sound like a teenage boy out for a joy ride in his dad’s sports car?  Nope.  Sadly, it was a Facebook post by the now notorious Jose Garzon, the conductor of the ill-fated train that recently derailed near Madrid, killing 79 and injuring so many more.  The nearby image is an actual clip from Mr. Garzon’s Facebook page.

For the first several days, the focus of the investigation centered around the train’s apparent excessive speed, and the transition of the train’s rail from high-speed track to conventional speed track on a curve.  This week, however, the investigation took a troubling turn when media reports surfaced containing information about the postings on Mr. Garzon’s Facebook page, (that page has now been taken-down)  The above quote and other comments by Garzon, including his musings about what it would be like to race a police car in his train, are painting a picture of a person who’s “need for speed” may have contributed to one of the worst train crashes in recorded history.

Whether or not Garzon is a speed junkie that caused the accident because of his reckless behavior is now essentially irrelevant.  Those Facebook postings provide the prosecution with all the ammo they need to create the perception that Garzon was a lunatic who cared more about satisfying his speed fix than he did about all the hapless souls on his trains.  And you know what they say about perception…it  has a way of becoming reality, particularly in the hands of a gifted attorney.

These Facebook posts arrived as a gift to the prosecutors (Garzon has been charged with multiple counts of negligent homicide), because individuals are so frequently falling victim to the temptation to talk about their sometimes questionable behavior on social media, leaving behind a litigator’s dream come true during discovery.

We posted another recent advisory on social media eDiscovery recently, (see “Social Media eDiscovery:  If You Are Not Doing it, You Will Be Soon”, on our blog / website),  but this Madrid train crash case was so compelling we wanted to highlight the social media topic again.  The “Take-Aways” posted below are taken from our previous advisory

Attorneys that ignore or mis-handle the vast Electronically Stored Information (ESI) landscape when engaged in investigations or litigation do so at considerable risk.  The above case and the recent Gatto v. United Airlines suit is a compelling example.  In Gatto, the Plaintiff’s attorneys allowed their client to “deactivate” or otherwise delete his Facebook account during a contentious litigation.  The result:  Sanctions against the Plaintiff in the form of an adverse ruling. [1] Here are some practical take-aways…

1. It’s there.  The ESI which can be found on social media sites is vast, often relevant, and unique.  It is frequently overlooked by litigants.  It can make your case. Go for it.

3. Technology is your friend. Powerful and inexpensive social media investigative software can help you crawl millions of social media bits and bytes in a fraction of the time of even the most tech-savvy attorneys.  This software performs aggregation, analysis, and data mapping on the discovered information and preserves it in a way that enables authentication if and when you need it.

4. This stuff can go away quickly.  Although social media references can be powerful and compelling, individuals that sense they are being investigated may be tempted to try to “take down” or otherwise obliterate this social media evidence, (ie., “erase” their Facebook account) if they suspect you are on to them. Can this deleted ESI be retrieved?  Sometimes. But it is always better to preserve it before your opponent suspects you are looking.

[1] Gatto v. United Airlines, Inc., No. 10-CV-1090-ES SCM, 2013 L 1285285 (D.N.J. Mar. 25, 2013)  Gatto filed suit against United Airlines claiming permanent disability suffered in an on-the-job accident.  After being ordered to produce data from his various social media sites, including Facebook, it was discovered that Gatto’s Facebook account had been deleted or somehow inadvertently “de-activated”.  The court opinion provided no leeway, stating:  “either scenario involved the withholding or destruction of evidence”.  Sanctions in the form of an adverse inference resulted.