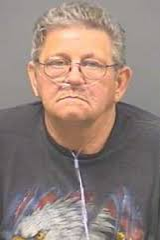 Jerry Lee Hendricks, pictured, a 66 year old repeat child sex offender, was suspected by a mother in rural  Momence, IL of molesting her daughter, a girl under ten years of age.  Ultimately Hendricks was arrested and charged.  As investigators closed in, however, Hendricks destroyed his phone’s SIM card, realizing that it contained incriminating photos.  Although the damaged SIM card was recovered by investigators, it was inoperable.

Computer forensics experts at the Illinois State Police were unable to recover the phone’s photos, and the girl’s testimony was not compelling, given her age.  It seemed the only way to convict Hendricks was to somehow recover those photos.

Enter Josh Fazio.  Fazio, a computer forensics expert with Chicago based 4Discovery, has a reputation for beating the odds in difficult cases.  Law enforcement authorities from Kankakee County, as well as the Assistant U.S. States Attorney, reached out to Josh for his expertise.

Loaded with the damaged SIM card, the phone would not give up the photos.  Previous efforts to install a new SIM card and “reboot” the phone, as well as other advanced mobile device forensics also failed.  Fazio, however, was able to manufacture a new SIM card for the phone, and essentially “dupe” the device into recognizing the new SIM as the original card.  The result?  Fazio recovered incriminating evidence of Hendricks’ crimes, including child pornography.  Josh’s creative forensics work and testimony resulted in a life sentence for Hendricks.

“I get immense satisfaction in removing a criminal like Hendricks from society,” said Mr. Fazio, a former Will County Sheriff’s Police High Tech Crimes Unit Detective.  “It makes those long hours in the lab well worth it.”

“We are tremendously proud of what Josh has done in the Hendricks case,”  said Jeffrey Hartman, a partner at 4Discovery, “and we are thrilled to have him on our team.  Josh is a gifted technician, and brings a wealth of skills to 4Discovery.  Our clients benefit immensely from his expertise and training. The digital evidence we are finding on smart phones, iPads, and other mobile devices is becoming increasingly critical, and there is a real shortage of talented experts who can recover and decipher this data.  Josh is among the very best.”

The number of smart phones in use in the world has topped 1 billion, according to global research firm Strategy Analytics, and the photos, documents, and emails stored on them have become a digital evidence gold mine for investigators and attorneys.  “One recovered deleted text message can make or break your case,” according to Hartman.

4Discovery An Inc. 5000 Company For The Second Year In A Row